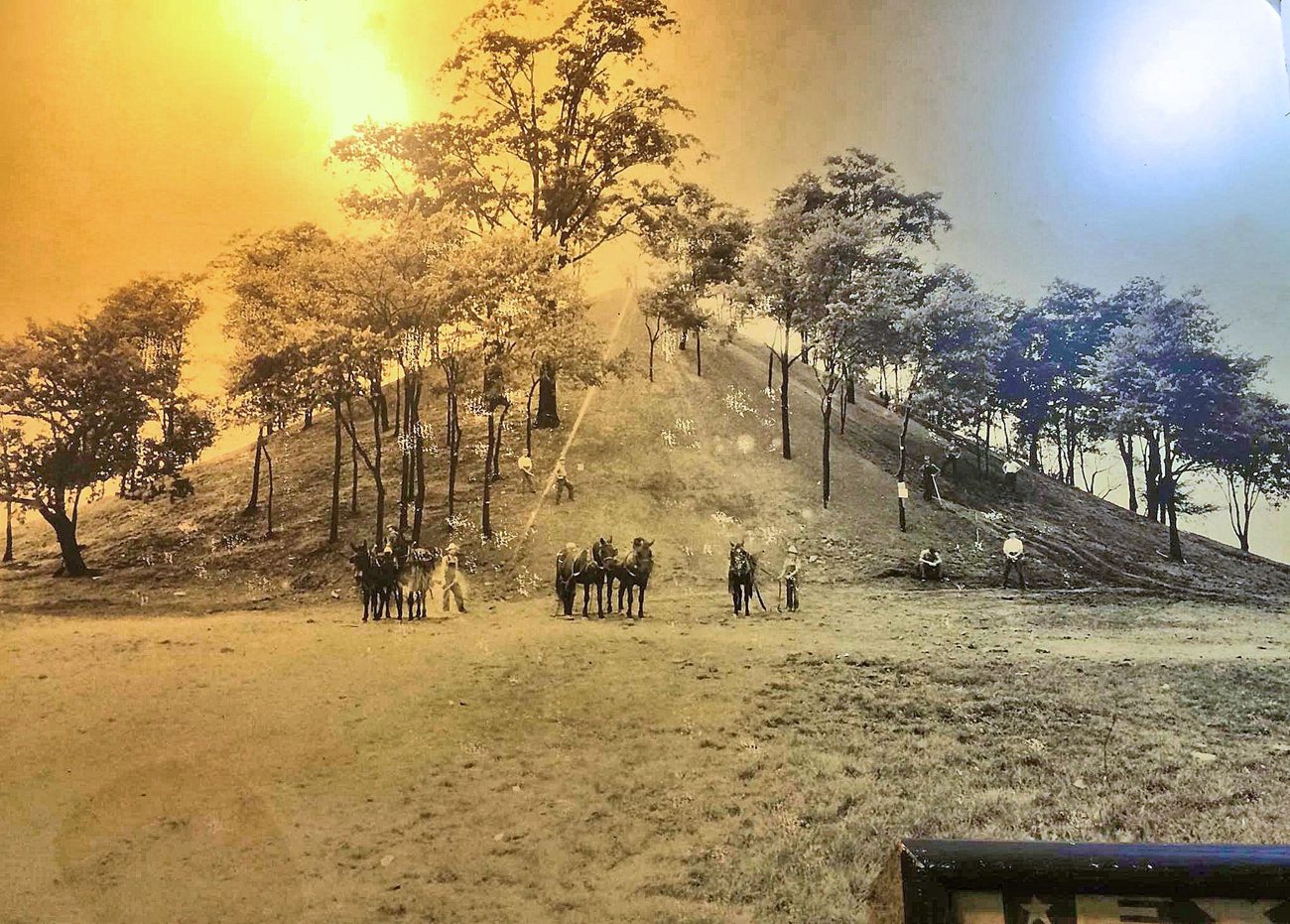 This vintage photo from the 1937-38 timeframe shows the steps being added to the top of Miamisburg’s landmark Indian burial mound.  This was a project of the federal Works Progress Administration.

Why the Star City?

Why the Star City? We all know Miamisburg is called the One and Only because it is the only city in the world with this name. More commonly, it has been known as the Star City. The million-dollar question is WHY is Miamisburg known as the Star City? This question remained a mystery for decades until a letter was discovered that seemed to offer an answer that matched the history and location of this special place. The late Forest Smith, founder of Star City Hardware, a longtime business fixture, wrote the letter in 1983. The letter put into writing many of his significant memories, which included those of Orville and Wilbur Wright and Charles Kettering. “I, Forest Bradley Smith, born September 20, 1892 in a log cabin (dirt floor) two miles south of Dayton Mall in Miami Township, Montgomery County, State of Ohio, lived here all of my life, through school and Miamisburg High School.” The letter continued and recalled his relationship with a man known as Mr. Riley and how Miamisburg became known as The Star City. “The grandfather of surveyor Mr. Riley lived in Miamisburg. Did some surveying for me. I carried the chain for him. During that week, he told me how Miamisburg got its name Star City. “Zachariah Hole was a minister who (Woodburn) east of Mad River Road on Whipp Road. There were four or five log cabins – one was a church. (He had a son, Dr. John Hole, an MD.) Zachariah rode horseback down to the Great Miami River where Bear Creek empties into the Miami River and met the chief of the Miami Indians and the medicine man. The three sat at a campfire and the medicine man asked ‘what will we call the new settlement?’ The chief looked up to the sky and saw seven stars, the seven sisters. The medicine man said, ‘it be Star Settlement.’ “That is how Miamisburg came to be known as the Star City but Miamisburg was named from the Great Miami River.” Was Mr. Smith correct in his reporting of this part of Miamisburg’s history? Was Mr. Riley just spinning a yarn to pass time? It will probably always be one of those questions that never have a sure-fire answer, but it sure is fun to imagine how the Star City began shining so bright. In the Beginning… On Feb. 20, 1818, four men from Pennsylvania -- Emanuel Gebhart, Jacob Kercher, Dr. John Treon and Dr. Peter Treon -- offered for sale at public auction 90 lots in a new town by the name of Miamisburg. Situated on the left bank of the Miami River, the plat was divided into square lots containing one-fifth of an acre. The small community had been known as "Hole's Station" since about 1797, when Zachariah Hole settled there with his family from Virginia and built a stockade as protection from Indians. In the interim, many settlers had arrived in the area, mostly from Pennsylvania. The name Miamisburg was derived from the Miami Indian tribe that resided there, combining "Miamis" with "burg," which denotes a borough or town. By 1832, the unincorporated community had become a village and achieved City status about 100 years later. Local Landmarks Indian Mound - Once serving as an ancient burial site, the Mound stands as perhaps the most recognizable historic landmark in Miamisburg. It is the largest conical burial Mound east of the Mississippi River and remains virtually intact from its origins hundreds of years ago. Located in a City park at 900 Mound Avenue, it is an Ohio historical site and serves as a popular attraction and picnic destination for area families. Visitors can climb to the top of the Mound via concrete steps built into its side. Daniel Gebhart Tavern - Serving during the 1800s as a gathering place for local residents and as a resting place for travelers, it stands today as a museum at the corner of Lock and Old Main streets. The museum is open June through September on Sundays from 2 to 5 p.m., or by appointment. The Miamisburg Historical Society (see info below) coordinates the Museum's use. Baum Opera House - This historic structure was built by Charlie Baum in the late 1800s on what is now First Street in downtown Miamisburg. It has had a number of unique uses over the years, but faced possible demolition in the early 1990s when the non-profit Baum Opera House Association was formed and purchased the building at a sheriff's sale. Extensive interior and exterior renovations have occurred since that time, and today the facility hosts entertainment and community events and is available for rental. Visit www.baumoperahouse.org for more information. Miamisburg Historical Society The Miamisburg Historical Society is a volunteer organization dedicated to the collection and preservation of data, artifacts and memorabilia relating to the history of the Star City and Miami Township. The Society hosts a variety of programs throughout the year for the general public and is headquartered in the Market Square Building in the heart of downtown. Contact the Miamisburg Historical Society at (937) 859-5000 or P.O. Box 774, Miamisburg, Ohio, 45342-0774. Historic Miamisburg Memories of the Star City is a half-hour interview program cablecast monthly on channel 5 of the Time Warner system. Please check www.mvcc.net for dates and times. The Miamisburg Historical Society is certified by the Ohio Association of Historical Societies and Museums.

Did You Know?
• The Indian burial mound in Miamisburg (top of page) was built by the Adena tribe long before the Miami Indians settled in the area.
• One of the most famous photographs of Miamisburg shows five modes of transportation(pictured above) in use in the 1800s. The waterway in the photo is the famous Miami-Erie Canal.
• Teddy Roosevelt is the only known sitting president to visit Miamisburg.
• Miamisburg native George “Hobby” Kinderdine was credited with kicking the first extra point in what eventually became the National Football League.
• Construction of the Mound Golf Course in the 1930s was a federal government New Deal project.
• Miamisburg was the childhood home of the McGuire Sisters, a vocal trio that rose to national fame in the entertainment industry in the 1950s and 60s. Their mother was a local minister.
• The ballot initiative that established the City’s Council-Manager form of government was passed in 1966 by four votes.
• The City of Miamisburg once owned and operated its own electric utility. It was sold to Dayton Power & Light in 1968 after fierce public debate and a vote of the citizens.
• The Miamisburg High School Alumni Association is the oldest continuously active high school alumni association in the in the nation.